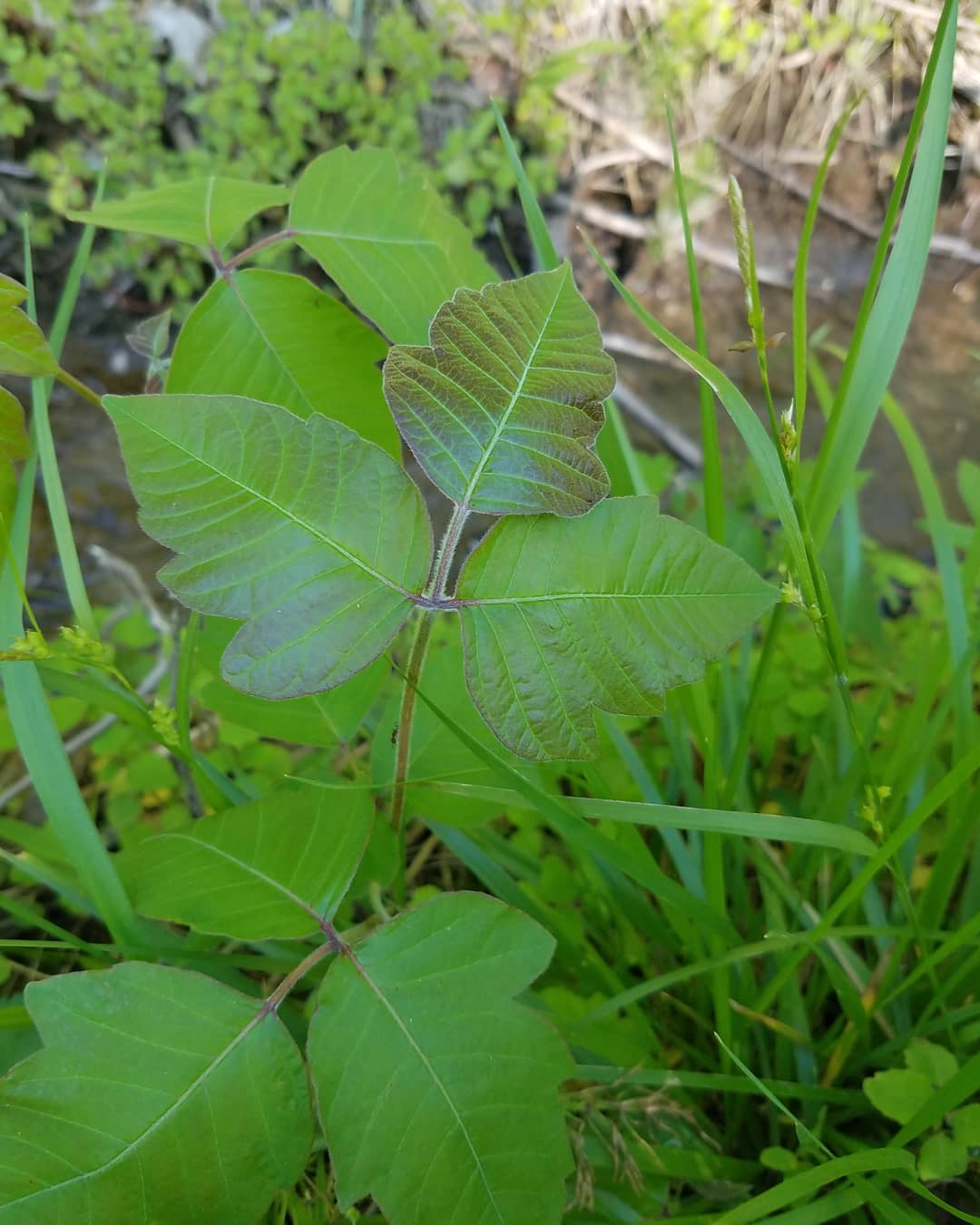 There are many beneficial native plants with trifoliate leaves that are completely benign. Speaking of beneficial native plants, poison ivy IS extremely beneficial for wildlife. The flowers are visited by bees, the leaves are hosts for several moth caterpillars and browsed occasionally by mammals, and probably most importantly, the white berries feed dozens of bird species. Of course, the birds are then responsible for its wide distribution, much to the dismay of all who react to the irritating urushiol oil, present in all parts of the plant.

Poison ivy (Toxicodendron radicans) can form a bush, creep along the ground, or grow as a climbing vine. It can be recognized by the glossy, toothed, trifoliate leaves. New growth sometimes has a reddish tinge. Fall coloring is often a brilliant orange. The vines are often covered in course hairs and aerial rootlets that allow them to cling to trees, fences, etc. 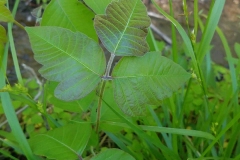 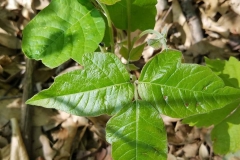 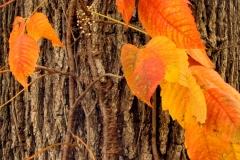 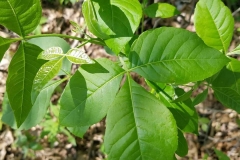 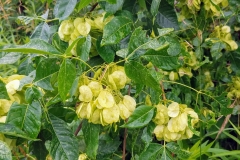 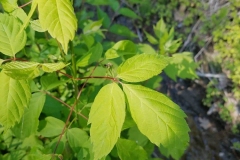 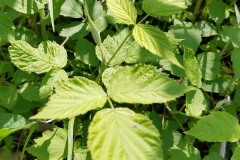 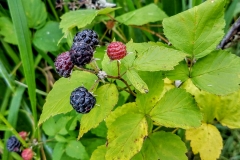 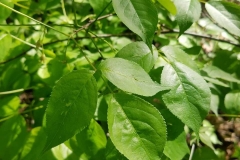 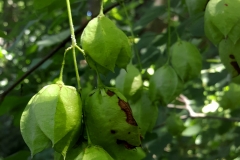 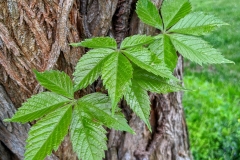 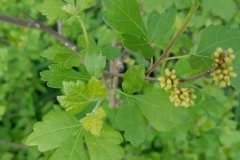 Now for a few native species that can be confused with poison ivy:

Hop tree (Ptelea trifoliata)
This small understory tree or shrub is also known as wafer ash (no relation to true ash, Fraxinus sp.). It is one of only a couple plants in the citrus family found in Illinois and is a host plant for the giant swallowtail caterpillar! The flowers attract many pollinators including many small bees, wasps, flies and ants. The bitter taste of the leaves protects it from heavy deer browsing.

Boxelder (Acer negundo)
As a seedling this native tree is often mistaken for poison ivy. The quick way to tell the difference is to look at leaf arrangement. The leaves of boxelder, like all maples, occur opposite each other along the stem. Poison ivy has alternate leaves. Boxelder is often viewed as a low-quality species, however it has an important ecological role to play. Common in riparian areas, it grows quickly and is often short-lived, leaving behind a home for cavity nesting birds.

Rubus sp.
If you see thorns, it’s definitely not poison ivy. Blackberries, black raspberries, and dewberries commonly occur in our area. As long as you can avoid the thorns, all three are a delicious treat for humans and wildlife alike!

Bladdernut (Staphylea trifolia)
Bladdernut is a thicket-forming shrub found in moist soils, often on creek banks and bottomland forests. It is easily identifiable by its drooping white flower clusters or when its namesake papery seed capsules are present. It is an interesting plant that I wouldn’t hesitate to plant in a garden setting, though it might need protection from deer, as it seems to be a favorite plant for them to browse.

Virginia Creeper (Parthenocissus quinquefolia)
It may not have leaves of three (usually five) but this native vine is often mistaken for poison ivy. It’s not uncommon for them to be growing in the same habitat or on the same tree. Poor Virginia creeper sometimes takes the blame for rashes when poison ivy was stealthily camouflaged among its vines! While it is rather aggressive, it is a great plant for wildlife and the burgundy fall color is hard to beat.

There are several relatives of poison ivy that should be mentioned here. Poison sumac (Toxicodendron vernix) is NOT found in Menard County. It only occurs in the northeast part of the state, found in marshes, swamps, bogs, and other wet sites. The sumacs we see locally belong to the genus Rhus and do not contain urushiol oil that causes the terrible skin reaction. There are two species of poison oak, none of which are found in Central Illinois. One is confined to the west coast and the other has a southeastern distribution.

If you think you’ve been exposed to poison ivy, the best course of action is to wash immediately, scrubbing thoroughly with soap and water to remove any oils. Be sure not to touch clothing, gloves, pets, etc. that may have come in contact with the plant. Quick action can sometimes prevent any skin reaction.

We hope you find this leaves-of-three tutorial helpful in IDing plants when you’re out and about this summer. We’d love to get your feedback in the comment section!

Post author, Alana McKean, an avid native plant gardener is the curator of the woody plant collection at Starhill Forest Arboretum. Alana also serves as the Illinois Native Plant Society Central Chapter newsletter editor, and is an active member of the International Oak Society. Alana worked in her native Iowa as a Conservation Planner with the Nature Conservancy and a county conservation naturalist. She is an ISA certified arborist and a 2008 graduate of Illinois College graduate with degrees in Biology and Environmental Science.